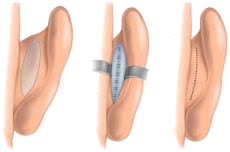 Everyone takes care of appearance, it is quite natural process. Unfortunately, despite all the advances of modern cosmetology, some congenital or acquired defects as a result of injuries can be eliminated only surgically.

Today otoplasty in Israel is the best option for those who need to adjust the shape of their ears, as it allows achieving the necessary aesthetic result with minimal probability of occurrence of all possible side effects. Through the usage of modern equipment and usage of the latest implants, otoplasty is performed easily and safely in Israel.

Otoplasty is the section of plastic surgery that deals with the correction or removal of the ear defects. The most often in Israel otoplasty is performed for those patients who want to get rid of droopy ears. There are also operations to restore ears, skin grafting, implant implants, etc.

According to the law, otoplasty in Israel is performed in the following areas, for the patients who are older than six years:

Compulsory assessment of the ears is performed before otoplasty in Israel. It allows you to determine the extent of the protruding ear, how the helix formed is, if there are any deformations. In the case of plastic surgery, each ear is separately studied, because the size and shape of the ears may vary.

There are some contraindications to otoplasty:

Branches of the otoplasty

Currently, there are two main areas of otoplasty in Israel: cosmetic and reconstructive plastic surgery of the ear.

Reconstructive otoplasty is appointed in the case of full or partial absence of the ear as a result of congenital abnormalities or injury.

Reconstructive otoplasty operations in Israel are divided into two stages:

Reconstructive otoplasty in Israel is recommended to perform after the pinna stopped growing (in the case of a birth defect). That’s why the best way to perform otoplasty is at the age of eighteen years and after.

Cosmetic otoplasty in Israel is indicated for the following defects:

Before the surgery, the patient must undergo a special examination, stop smoking, and taking drugs that can affect blood clotting and increase bleeding.

The main goal of otoplasty is to give back the natural form of the ears.

Either local or general anesthesia, or combined version can be used during the otoplasty in Israel. If the patient is a child, anesthesia is administered intravenously.

During the operation the surgeon makes an incision in the crease behind the auricle, and using special tools generates the new ear. After that the cosmetic suture and sterile compressive bandage are overlapped. Next, the patient should take painkillers, as well as wear an elastic bandage for two weeks.