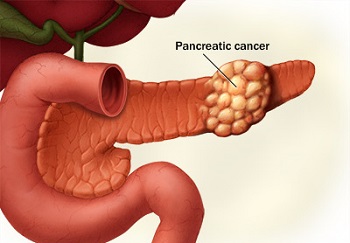 Today, pancreatic cancer is the sixth most common malignancy disease. Every year it`s victims become 30 people out of 100 million and it is diagnosed in more than 220 thousand people. This disease is very aggressive, in addition, it is difficult to diagnose, so basically pancreatic cancer is detected in the later stages.

The treatment of pancreatic cancer in Israel and predictions depend on the stage at which the disease is detected - timely initiated therapy in the early stages of recovery is very likely, though, and requires the use of all arsenal of modern oncology.

This type of cancer mainly is diagnosed in older people (60-80 years old). Among men, the disease appears more often than women. In group risk are people with chronic diseases of the pancreas (diabetes), and people who abuse alcohol and smoking.

The fact that someone from the family members suffered this type of cancer does not increase the chance of the disease, however, the risk of developing the disease is increased in those families where the genes BRCA 1 and BRCA 2 are present, or in families in which there is a disease of the intestine polyposis (PAF).

The presence of genes BRCA 1, BRCA 2 and CA 19-9 attaches great importance as they determine the nature of the disease. In addition to these risk factors, there are other - more often this pathology is diagnosed in people with a high familial tendency to growth of various kinds of growths, warts.

However, so far not found a specific gene that affects the development of this form of cancer.

Pancreatic tumor is divided into different types depending on the tumor and histologic type of cancer cells. In most cases (70-80% of cases) there is an oncology in head and body, usually begins with the development of the mucosa on the inner walls of the gland. This type of cancer is called adenocarcinoma. Also there are other less common types of pancreatic cancers such as neuroendocrine tumors, lymphomas and sarcomas.

In the treatment of pancreatic cancer in Israel is used the international classification of malignant tumors, which is divided into four main stages:

For a long time the disease is in progress without symptoms, and sometimes the symptoms can be vague and not clear. We present the most common symptoms of the disease.

The patient may feel the discomfort and mild pain in the upper abdomen. In the early stages the pain is temporary, but eventually develops into a constant. Usually the pain is less noticeable in a sitting position and is worse when bending forward and in the supine position. Loss of weight and appetite are also common symptoms of pancreatic cancer.

Some symptoms are similar to hepatitis B, such as yellowing of the skin, dark urine, light stools, itchy skin. Such symptoms may also indicate pancreatic cancer. This occurs when the tumor is located in the head and its growth blocks bile duct from the liver to the intestine, causing accumulation of bile in the liver and as a consequence - the symptoms of hepatitis.

Other possible symptoms are heartburn, feeling bloated after a meal feeling very tired. 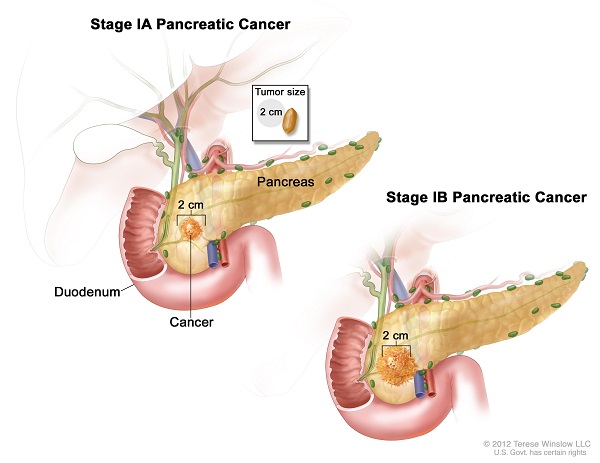 Diagnosis of pancreatic cancer in Israel

Pancreatic cancer is difficult to diagnose because of anatomical location of the body. Traditional ultrasound investigation can detect abnormalities in the gland in 80% of cases, but more informative diagnostic method is endoscopic or intraductal ultrasonography and magnetic resonance imaging (MRI), PET-CT.

To determine the tactics of treatment of pancreatic cancer in Israel is also necessary to perform examination, including retrograde cholangiopancreatography, during which you can get a small amount of tissue for research. In addition, Israeli hospitals provide urine test for bilirubin and bile components, as well as advanced blood tests, including the CA 19-9 tumor marker test for pancreatic cancer. In case of detection any suspicious symptoms, additional visual inspections are performed.

The main method of diagnosis is a biopsy. In case of suspicion of cancer, biopsy of the prostate tissue will be held. A biopsy can be performed under ultrasound or CT. In some cases, biopsy is not possible due to the inaccessible location of the tumor. In such cases, it is shown laparoscopic diagnostic surgery.

This research is carried out in the course of a small operation under general anesthesia. It allows the doctor to assess the possibility of surgical removal of the tumor and take a sample for histological examination. In the case of operability the laparoscopic surgery is performed to remove the tumor. Sometimes laparoscopy is performed under ultrasound navigation system, this is done in order to pinpoint the location of a laparoscope.

Additional diagnostic methods may include: liver ultrasound and abdominal CT.

It should be noted that several diagnostic techniques are applied not only for the detection of disease, but also to test the effectiveness of tumor treatment.

Currently, the treatment of cancer in Israel the most commonly uses complex therapy that combines different techniques and can effectively deal with various forms of cancer.

An effective method of treating pancreatic cancer in Israel is surgery. Whipple operation is performed most often, during which is removed the head of the pancreas and nearby tissues. Such operations are performed for people of middle age with good health.

When the tumor is situated in the tail or body of the prostate gland resection is performed with simultaneous removal of the spleen.

Surgery is performed at initial forms of pancreatic cancer, and its efficiency is high when the tumor identified in a timely manner.

When the treatment is found out that the removal of the tumor is not possible, due to the fact that it blocks the bile ducts, is performed surgery ERCP - endoscopic retrograde cholangio-pancreatography. The result of the operation is to relieve symptoms of the disease, but it is rather a kind of palliative treatment. 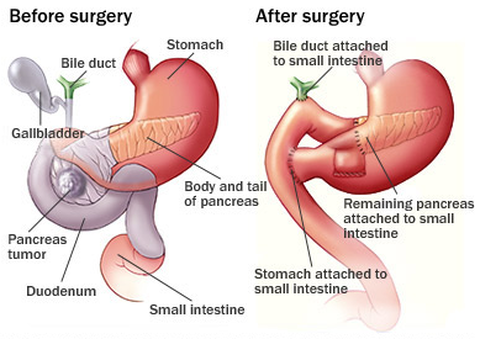 The most modern method of therapy of this disease is the operation with the help of nano-knife. The indications for its implementation are inoperable tumor with vascular lesions and sprouting in the neighboring organs, the development of which is stopped with the help of neoadjuvant therapy.

The operation - the destruction of cancer cells in the presence of strong electric fields generated directly at the tumor site. The operation is performed under general anesthesia in cancer under control visualization tools are found electrodes through which the device NanoKnife® delivers a high-voltage electric current (3000 volts). The electric field affects the tumor cell membranes, causing their death. Healthy tissues thus remain undamaged.

This method has the advantages of the classical and before surgery and before the modern methods such as radio frequency ablation, or laser ablation, so as nano-opener has no effect on collagen and elastin, and thus does not damage the blood vessels and bile duct.

The pancreas is located just near the major highways of blood - abdominal aorta, superior mesenteric vein and artery, and advanced stage of pancreatic cancer are often involved in the process, these blood vessels.

It is also possible to combine surgery with nano-knife for tumor resection margins. Efficiency of treatment for pancreatic cancer in Israel using nano-knife is very high, this method can achieve success where it was not possible until now.

In the treatment of this disease in Israel is also widely used chemotherapy. In cases where a tumor has been removed surgically or with the help of nano-knife, it is held as an additional chemotherapy treatment capable of destroying cancer cells in the blood. Sometimes chemotherapy before surgery is performed in order to try to reduce tumor size and thus reduce the amount of surgical intervention.

When the removal of the affected organ tumor is not possible, and it is in the surrounding parts of the body, chemotherapy does not cure the disease completely, but it can stop the process of tumor growth or to slow it down to a certain period of time.

Chemotherapy can be carried out in combination with radiation therapy to consolidate the results. When the tumor has spread to distant organs of the body, chemotherapy is carried out in an attempt to reduce the size of metastases and ease their symptoms.

Radiotherapy IGRT is the most modern method of exposure. It is performed instead of surgery when the tumor is small in size. When specialists are use radiotherapy IGRT (radiosurgery) it held 3-5 irradiation sessions. Today it is a very promising method and its results are identical with the results of surgery, it does not require long-term rehabilitation, which is necessary during the operation.

Timing recovery after chemotherapy and radiation therapy is reduced by using special tools to increase blood counts. In Israel, there are developing non-drug means to overcome neutropenia and thrombocytopenia.