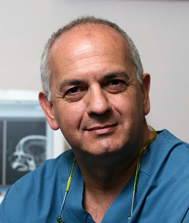 A famous professor Shlomi Constantini is the head of the neurosurgery department at Dana Children’s Hospital. This is one of the leading children neurosurgeons not only in Israel but also in the world. Dr. Constantini operates children from different countries, including the U.S. and Germany. The prices for the neurosurgery in Israel are different, but they are implemented in a professional manner. Basically the cost of surgery is about thirty thousand dollars. At the same time, the price of consultation with Professor Shlomi Constantini is $ 800.

Neurosurgical treatment of children and adults.

Since 1993 and 1996 Dr. Shlomi Constantini, has worked as a leading expert in the field of neurosurgery at Hadassah University Hospital.

Subsequently, from 1997 to the present day, Professor Constantini is the head of children's neurosurgical department at Dana Children’s Hospital, which refers to Ichilov Medical Center (Sourasky). The basis of clinical experience is neurosurgery. Israeli prices in this area aren’t at the highest level, and the cost of the operations, which are conducted by Shlomi Constantini is justified.

In 1990 he was the lecturer in neurosurgery, Hadassah Medical School at Hebrew University, Jerusalem, Israel.

In 1991 Shlomi Constantini began to engage in research on the topic of neurotraumatology and ischemic changes in New York.

From 1997 to 2003, he was a leading lecturer at the Faculty of Medicine, Tel Aviv University.

Since 2003 and till today he has been holding the position of professor at the Faculty of Medicine of this university.

It should be noted that Professor Shlomi Constantini has a great respect through other neurosurgeons in Israel, as he is Founding Member and President of the International Federation of Neuroendoscopy (IFNE). In addition, he is also a General Secretary at International Society Pediatric Neurosurgery (ISPN).